Gum disease also is known as periodontal disease and is an infection of the gums surrounding your teeth. Gum disease one of the top reasons for tooth loss in adults, and because it is virtually pain-free, many patients do not know they have the disease. During each regular checkup, your dentist will check for signs of periodontal disease by measuring the space between your teeth and gums. 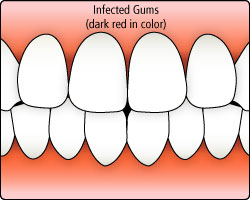 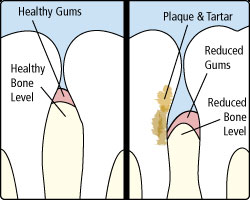 Gum disease is caused by a build-up of plaque (a sticky form of bacteria that forms on the teeth). If the plaque is not removed (by flossing, brushing, and regular dental checkups), it will continue to build up and create toxins that can damage the gums. Periodontal disease forms just below the gum line and creates small pockets that separate the gums from the teeth. Periodontal disease has two stages: gingivitis and periodontitis.

Gingivitis - This is the early stage of gum disease, when the gums become red, swollen, and bleed easily. At this stage, the disease is treatable and can usually be eliminated by daily brushing and flossing.

Periodontitis - If left untreated, gingivitis will advance into periodontitis, and the gums and bone that support the teeth will become seriously and irreversibly damaged. Gums infected with periodontitis can cause teeth to become loose, fall out, or be removed by a dentist.

Certain factors can increase a patient's risk of developing periodontal disease, including:

While it is possible to have periodontal disease and not know it, some symptoms can include:

Treatments for gum disease can vary depending on the severity of each individual case. Typical treatments include:

Regular dental checkups and periodontal examinations are important for maintaining your health and the health of your smile. You don’t have to lose teeth to periodontal disease, and by practicing good oral hygiene at home, you can significantly reduce your chances of ever getting gum disease. Remember to brush regularly, clean between your teeth, eat a balanced diet, and schedule regular dental visits to help keep your smile healthy.

At Afton Dental, we make it convenient to plan your visit. Click the link to request an appointment time that fits your busy schedule. We can't wait to see you.